“What I’m most afraid of when I go back, isn’t being killed. What really petrifies me is being attacked and tortured.”

A link to the original Danish Article is here

Transgender woman Fernanda raped in a Danish centre for asylum seekers.
In Denmark you are a man if it says so on your papers. 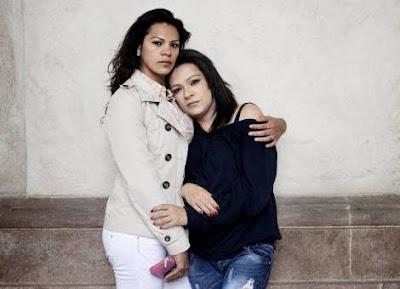 Large brown eyes framed with eyeliner and mascara, “Paola” she says with a cautious, gentle voice and holds out a hand with lightly polished nails. Her shirt is slightly open at her breasts. “Fernanda” says the other whose blouse shows one shoulder. Her make-up is flawless and her long shiny hair falls down to her back.

The two women both fled to Denmark from Guatemala and both of them, if one looks at their papers, are men, in Danish law. So when Fernanda came to Denmark and sought asylum she was placed in the male wing of Sandholm refugee camp.

“I was really scared. I was new to this country. I came from a foreign country and from a terrifying background, and I faced daunting prospects here in Denmark, so I said nothing.”

She can’t remember how many months she was in Sandholm, she has suppressed it in the hope of forgetting the assault, rapes and other humiliations she suffered while she lived there.

“I wasn’t raped by just one man but by many.”

Only for women
In Sandholm she had her own room, which she should have shared with another transgender woman, who never came because she refused to live with the men.

“I didn’t want special treatment but I do have special needs because of who I am.”

One night several men broke into her room, where they raped her. She fled the camp the same night.
“I didn’t go to the Red Cross and report it. It was them who put me there. Why should I trust people who hadn’t even bothered to listen and who had put me in that situation?”

Danish Red Cross which runs the Sandholm Centre has not commented on the case, but according to the head of asylum Anne La Coeur, there is no automatic placement in a particular type of accommodation when in comes to transgender people, but they do have specific guidelines which apply when dealing with sexual minorities.

“Basically a transgender woman is likely to be placed in a male dormitory but in a single room. But we would not place her in a women’s dormitory because that is definitely for women, where cannot permit ourselves to place a man.” Says Anne La Coeur.

Consequence of her choice.
Alone in a new country and without anywhere to go, Fernanda ended up being trafficked to a brothel in Jutland. It was only after a police raid on the brothel where she was working that she came into contact with the organization Reden International, where she has lived since February 2011. Linked to the possibility that her asylum case might be reopened she was subsequently humiliated at the police station in charge of its reopening. Here she was told that rape was a consequence of her choice.

“Being a transgender woman is not a choice. You feel you were born this way. It is not my fault, but it was as if he blamed me for being who I am.”

Her stay at Sandholm also had other, physical consequences.

The hormone treatment she had been taken since she was 14 was suspended, and it was more than a year before she again received this, necessary treatment, so that she can maintain her feminine appearance. Acording to Fernanda missing the hormone treatment  was one of the worst things that has happened to her since she has been in Denmark. Her body began to change in a way she didn’t want.
To obtain female hormones requires an interview and a course at the Sexology Clinic at the national Hospital. By the time Fernanda came to being seen by the clinic they assessed her as not transgender.

“They cannot decide for me who and what I am” she says.

Repatriation equals a death sentence.
Paola has lived together with Fernanda at the International Women’s  Centre since March 2011, she is also transgender. She first sought asylum last year, when she went to the Women’s Centre. For that she is relieved, as she has little doubt that her story would have been identical to Fernanda’s if she had applied before she got to the women’s centre. Paola is undergoing a course at the Sexology Clinic but has still not commenced hormone therapy.

Both women are terrified of being sent home. Fernanda has had a response to her asylum application. On the 17th September she will be on board a plane to Guatemala. Paola is still waiting for the response to hers.

“Life for transgender people in Guatemala is terrible. You suffer discrimination and you have no rights” Says Paola.

The two women, who have both fought for transgender rights in Guatemala, say that transgender people have no possibilities other than prostitution. Yet these two both tried another way. Paola enrolled on an educational course and paid a lot of money to be accepted, but on the first day when she showed up and they found that her gender did not match that on her ID, she was thrown out.
“Education was only for men and women and not for people like me.” Says Paola.

"In Guatemala if you are different you are cut off from your family, from society and by the government. You cannot get an education. You cannot get medical treatment because if you arrive at the hospital as a woman and your papers say that you are not, they refuse to treat you even if you are bleeding to death. They would rather let you die than treat you.” Says Fernanda.

The reason, according to Fernanda, is that Guatemala is a Catholic country, where the church has a great deal of power, and its fear spreads out through society and makes people resort to vigilantism. “I know no transgender people in Guatemala over 35,” she says.

“What I’m most afraid of when I go back, isn’t being killed. What really petrifies me is being attacked and tortured.” Says Fernanda.
Posted by Natacha at 10:26 6 comments: