My opinion of Germaine Greer, and her apologists, just got lower, and here's why...

In my opinion Germaine Greer has blood on her hands, yes blood on her hands. Here's why... While the chattering classes and politely transphobic supporters of a simplistic Toytown approach to "free speech" were applauding Greer's mindless hatred against trans women, one of our number was lying dead on a slab. Vicky Thompson died by suicide on Friday 13th November after being committed to a male prison, only shortly after 150,000 people signed a petition for another trans woman, Tara Hudson, to be moved from a male prison to a female one.

We can now see that those people who signed, who campaigned, who pressured the Home Office on Tara's behalf should probably be credited with saving Tara's life.

Yet immediately, and quietly, the Home Office was placing another trans woman in a male prison. Vicky Thompson has lived as a woman since her mid-teens and whatever her crime she did not deserve to die, yet the policy of the Home Office seems not to have changed after the uproar over Tara Hudson. It is time for someone to take responsibility, the appropriate minister should resign and there should be a proper public inquiry into her death.

Greer has mindlessly and arrogantly proclaimed that trans women are "men" as often as she could, and has been granted as much access to mainstream media as they could possibly give her. This is the result; 4-5 weeks of anti-trans bigotry everywhere from New Statesman to the Spectator, on our TV screens and spewing from our radios. The chattering classes, the editors and journalists supporting her right to harm trans people have done their work and Vicky Thompson's short life has been ended.

Oh I'm sure these commentators and editors will absolve themselves by arguing that there is no "evidence" to link what they have done to Vicky's death. But to argue that a stream of bigotry telling everyone and anyone that trans women are "not women" has not had its effect is just mealy-mouthed platitudes. Whoever made the decision about where to place Vicky must have been affected by this torrent of hatred, misinformation and unsupported truisms (lacking in any "evidence") coming from Greer. People never act in a vacuum and the prevailing cultural climate always influences decisions.

So of course I believe Greer is responsible for Vicky's death and will be responsible for many others too if allowed to continue unchallenged. So far very few mainstream media outlets have broken the media consensus about her right to harm us. The people responsible for writing and editing this torrent of simplistic drivel also have blood on their hands.

One of the things people like me have constantly said is that, despite journalists telling me I am opposed to transphobia in the media because I am "offended", that is not the reason. Transphobia kills; trans people have been campaigning against the kind of hatred spouted by Greer for a reason. Vicky Thompson is one of those reasons. She was only 21 for fucks sake! What chance did she have? How many more trans people have to die, how many have to self-harm, how many have to go through community and family rejection, exclusion and bullying, how many have to suffer consequent mental health difficulties, how many have to end up on the streets before people understand that this sort of anti-trans propaganda has a consequence?

The significance of Paris Lees on BBC Question Time.

I have to admit I rarely watch TV at all, it is boring, repetitive and regularly discriminatory. I also do not want to pay a TV licence because the BBC regularly gives too much publicity to a bunch of racists and bigots called UKip. However I am glad I watched Question Time at a friend’s flat last night. It featured Paris Lees. It is always important to see trans people in the media. As the recent Germaine Greer incident has shown, trans people are regularly denied access to mainstream media over important issues that concern us. 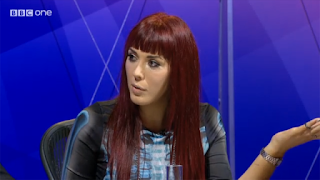 So why is it so important that Paris was on TV last night? There were no questions about any trans issues, the questions were about a mix of issues, but nothing trans related. Anyone could have been on.

Yet this is exactly the point, and something that will make Greer and all the other TERFs really sick; the fact that she was on was entirely unrelated to her being a trans woman. She is a citizen of the UK and deserves to be included in the national debate on all issues like all other trans people. This is the normalisation of trans people. We are not objects of discussion by others, like TERFs and their friends the conservative psychiatrists who have debated and Othered us for decades, a tradition that Greer and the like desperately want to continue. We are subjects.

Increasingly the exclusion of trans people by TERFs is not happening. Obviously the acceptance and inclusion of trans people is not happening at a uniform rate but it is happening and the appearance of Paris on QT is a further step forward for trans inclusion. It shows people in their millions around the country that we are people just like them and that we have opinions about issues other than being trans. The objects of TERF dehumanising objectification have stopped beng objects and started being subjects.

The significance of Paris Lees on Question Time? The fact that it was not significant made it significant.
Posted by Natacha at 01:17 No comments: