The following represents my opinion of the Gender Identity Clinic run by Dr Zucker in Toronto based on the findings of the Zinck and Pignatiello report.

The report by Suzanne Zinck and Antonio Pignatiello published on the 26th November is damning of the Gender Identity clinic run by Dr Kenneth Zucker. There is no other way of describing it. There are plenty of elements which are worse than that; they are shocking, no child should ever be subjected to this sort of treatment; 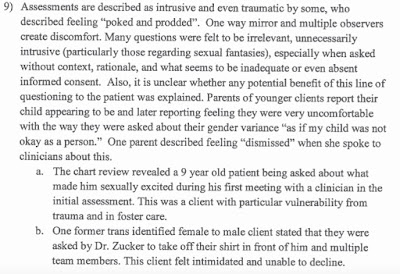 It is indicative of the attitude towards trans children that this kind of thing has happened. This does not occur when staff are respectful towards trans children and should be regarded as very serious indeed. As a professional who has worked with children, if anything like this had happened with any member of staff for whom I was responsible, their career would have ended very abruptly.

But cutting straight to the chase, probably the most damning part of the report is this;

This is what trans people have been saying all along; for example a number of demonstrators including Sarah Brown and myself handed out these leaflets (created by Sarah) at a conference in London where Zucker was speaking. That was nearly 10 years ago. This means that the medical establishment internationally and in Canada has been ignoring trans people on this issue for a very long time; indeed trans people have been telling anyone who will listen most of the findings of this report, for decades. It must be remembered that Leelah Alcorn was a victim of Reparative Therapy a year ago

Pathologisation of young trans people and trans children. In plain English that means telling the children that they are the problem, rather than the attitude of people around them. Not only is it a lie but it is consistent with the Reparative Therapy approach which trans people have consistently accused the clinic of engaging in.

In my view this represents bullying. Bullying of children who are not in a position to resist or respond, the damage caused by this treatment is incalculable and the numbers of children who have been harmed by this clinic must be counted in the hundreds at least, since trans people have been protesting about it.

So why has it taken such a long time for the international medical community to take notice and listen to trans people? That is a question only they can answer, but it is one which will be asked, repeatedly, by trans people from now on.

From Janice Raymond to J Michael Bailey and now to Toronto, it appears that ethics are deemed not to apply when trans people are involved. Clearly the defendants at Nuremburg were researching human beings whereas those researching trans people do not consider themselves to be doing so;

Trans people have disproportionately been victims of ethical breaches in research and in clinical and practical terms, given the small number of trans people who have been researched, it is disturbing how many ethical problems there have been. It is clearly no coincidence that the prevailing view of trans people among researchers who breach ethical standards is that we are "the problem" rather than them.

It is this fundamental dehumanisation of trans people that is at the root of the issue, the problem is society's non-acceptance of trans people; as Sass Rogando Sasot put it;

In this instance the Toronto Gender Identity Clinic for children was, rather than trying to alleviate the underlying problems suffered by trans people, making them worse.

There will be plenty of implications resulting from this publication; the most immediate will be "trust trans people". We are who we say we are; we are the experts on being trans, treating us as anything less than human beings is unacceptable, harmful, abusive and makes those who do so part of the problem.

Why, after decades of protest by trans people has this action to shut Zucker down, only happened now? Why were the protections normally applied to organisations dealing with cisgender children not applied to Toronto? It isn't Rocket Science to listen to trans people and to treat them as the clients rather than their parents - something which is also, in my view, highly unethical.

It also puts a huge question mark around the multiple publications by staff at the Toronto clinic which argue that most trans children do not grow up to become trans adults. This research must now be regarded as highly problematic and unreliable. This is research which has been cited by many anti-trans activists including TERFs, right-wing "Christian" fundamentalists, libertarian trans haters and the assorted rag-bag of dodgy journalists and fanatical academics who spread misinformation and disinformation about trans people under the guise of "free speech". One more element of their weaponised arsenal of deliberately misleading rhetoric is put beyond use. At some point someone will probably carry out a larger-scale study which will be regarded as more reliable, and doubtless it will demonstrate a much lower rate of trans children not growing up trans. 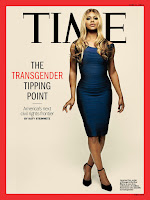 Make no mistake, this report marks another part of the Transgender Tipping Point; being anti-trans is no longer respectable, there is no theoretical, scientific, psychological, sociological, medical, or ideological basis for the hatred of trans people. This is a big domino as almost the last of the big transphobic institutions whose employees give respectability to hate groups has fallen. People who are in effect advocating crimes against trans adults and trans children are no longer respectable.

Time to listen to trans people not trans haters.
Posted by Natacha at 14:42 No comments: 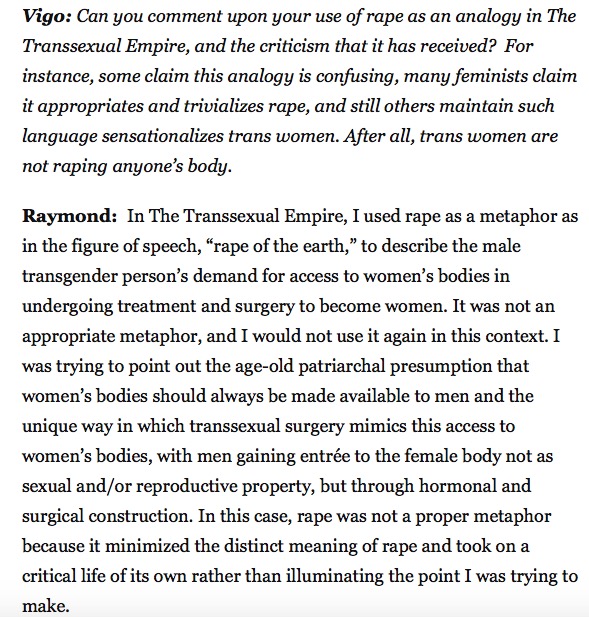 Fanaticism: The Hand holding the knife

Germaine Greer, hater of trans people, has upped her weaponised rhetoric by declaring, theatrically, that she wouldn’t recognise trans women as women even if a knife were held at her throat. Whilst I would very much doubt her at her word when she says this, it is clear that her fanaticism has developed along the same lines as those of many other fanatics.

Of course lots of people can play that game; I could say that you could hold a knife to my throat and I will never recognise Greer as a feminist, a bona fide academic or indeed as anything other than a bigoted oppressor of trans people who is milking as much publicity as mainstream media will give her (and they are giving her a lot). But it would be a lie. It would be a lie because people like her are not worth dying for, she is not worth even a slight scar in the place where no Adams Apple exists.

What is worth taking action over however, is the way mainstream media has given her, and those who wish to make a big deal out of her “free speech” plenty of publicity. The way mainstream media has publicised her hatred and increasingly fanatical bigotry is not consequence-free. Two trans women have recently died in male prisons because of the exact same bigotry that she promotes. It’s strange isn’t it, how hate speech against trans people is a “Free Speech” issue, when hate speech against anyone else is a Hate Speech issue.

Her fanatical transphobia is clearly not rational. It seems to me that the kind of “I will die to impose my oppressive beliefs on everyone else” attitude is one more associated with the Isis terrorists than a rational academic mind. Greer has gradually become more and more fanatical in her attitude as the year has gone on, to the point now where she has crossed the Rubicon between obsession and fanaticism, and with every transphobic pronouncement she devalues her previous writing a little more, things I used to take seriously now increasingly read like either the product of monkeys and typewriers or of a grating insincerity borne out of a desire for fame at any cost.

Watching a formerly respected individual gradually self-destruct from a burning fanatical hatred is, of course no fun, especially if it discredits feminism, but it is worse than that. Greer’s pronouncements have an effect. They make it increasingly acceptable to be transphobic, and transphobia costs lives. Would Vicky Thompson and Joanne Latham still be alive if it were not for Greer’s hate? It is of course impossible to know for sure. What is certain however, is that the discrimination which drove them (and many others) to their deaths by their own hands was not helped by Greer.

To be honest Greer really has lost the plot in this interview. She has simply got a whole lot of factual information, especially about marriage and transitioning, completely wrong. For a supposed “academic” this is a joke. Let’s be honest this interview was a car-crash on a par with Gerard Ratner’s famous interview, which knocked £500 million off the value of his business overnight.  This interview was the academic version of “doing a Ratner”. Revealing her fanaticism, relying on inaccurate (and easily checkable) information, which she attempts to sensationalise, Greer has undermined herself and revealed herself as a joke. In a sense the media has given her enough rope and she has hanged herself.

Yet irony of ironies the hand holding the knife is not that of a trans person. The hands holding the knife are those of Greer and her apologists, and the throats, some of which have already been cut, are those of trans people. If cis people cannot see her now for what she really is, they are wilfully, and criminally, blind.