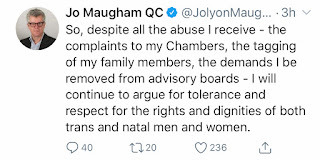 I was dismayed to read a number of tweets from you, in which you infer that you take a “balanced” or “neutral” position on trans rights. This letter is to explain to you why I do not believe that your position is either. Not only is the “debate” between trans people and transphobes one on which it is impossible not to take sides – there is no fence to sit on, there is a deep ravine between the two sides – but, by the language you have used you have clearly taken one side.

I am not sure whether you realise that you have firmly taken one side, the side of the transphobes, but you have and the reason you have done so is that you tweet about a “conflict” between trans rights and “women’s” rights. It is this “women’s” that is problematic. The opaquely-funded “women’s concerns” groups that have sprung up over the last three years (I will return to funding later, and it has links with the people you have been fighting against; Leavers), first and foremost do not represent “women”. Women are overwhelmingly in favour of trans rights, especially the right of trans people to self-identify, these groups, in contrast, represent “transphobes”, although of course they aren't going to say that and are going to say they represent "women". They are transphobic groups formed with the sole purpose of denying trans people human and civil rights. They do not even represent “feminists” or “lesbians” as some claim, and they have increasingly developed links with extreme right-wing groups in the US who appear to be behind much of their – considerable – funding. So the fact that you have characterised this as a conflict between “women” and trans people means that you have taken sides with the transphobic groups pretending to be campaigning for women’s rights.

The second issue is the idea that there is a conflict at all. Trans people, and our allies in feminist and LGBT groups around the country are firmly opposed to the notion that there is any “conflict” at all. There is none. The main issue is the one these transphobic groups were set up to fight, that of statutory declaration of gender for trans people. There are a number of jurisdictions around the world, including Ireland, Malta, California and a number of other US states, Portugal, Argentina, Uruguay, Denmark, Norway, Mexico City, where statutory declaration of gender is already enacted. In most cases they have been for many years. If these transphobic groups’ claims are to be believed then there would have been hundreds of examples, in these locations, where cis women (the word is “cis” not “natal”) have been disadvantaged or worse, as a result. In fact there have been none. Not even one.

How do I know this? Because there are massive right-wing news organisations around the world, from the Times to the Australian, Fox News, the Daily Mail, some newspapers in Sweden, the Berlusconi media in Italy that are directing considerable resources at harming trans people through selective and misleading propaganda (There is no other word for it). If there had been any of the incidents, anywhere in the world, that these transphobic hate groups are spreading fear about, then they would have been all over the front pages, and everyone would have heard about them. The fact that there have been none is therefore significant.

So the idea that there is a “conflict” between trans rights and women’s rights is simply not true. However the fact that you have tweeted that there are means once again that you have taken sides. Trans people, our allies and most women do not agree that there is a conflict at all. The transphobic groups, including some powerful journalists, say there is. There is either a conflict or there is not, there isn’t a fence to sit on and you have planted both feet firmly on the side of the transphobic groups. 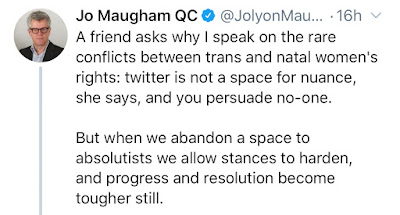 The language that you use has also demonstrated that you have taken sides. “Natal” is a term that the transphobes use. It is intended to infer that cis women (the correct term) are somehow more “natural” than trans women. My suspicion is that you have decided to use this term after some of the transphobes have persuaded you that “cis” is some kind of dirty word, or a “slur”. Your choice of language reveals which side you have taken. “Natal” is used by transphobes “cis” is used by everyone else. There is no fence.

When you use the term “absolutists” to refer to both sides, as if somehow there is a middle ground where trans people can have some rights but not as many as we should have, you are also revealing a bias toward the transphobic sides. A good metaphor here is Brexit. The Leavers are clearly increasingly extreme or absolutist. But to portray Remainers as somehow extreme or absolutist, as some have attempted, would obviously be wrong. We are people who do not want to lose our rights or damage our country for the sake of a global right-wing project to destabilise Europe. Just because there are two sides does not mean that each side’s arguments are of equal value. Remaining in the EU is neither extreme, absolutist nor unreasonable, wanting to leave, especially via a no deal brexit, is very extreme. Wanting the same human rights as cis people is likewise not extreme either.

The parallels with Brexit go beyond this however, and it is worth noting that there are serious issues relating to the funding of these transphobic groups and, as far as I can see all of them have the same kind of opaque funding arrangements of the kind identified by Carole Cadwalldr. Indeed there is a right-wing "Christian" group in the US that is openly directing funding towards UK anti-trans groups. What happened on a large scale in the referendum, is happening on a smaller scale with these transphobic groups. Some have received considerable funds from mysterious and undeclared sources, in the same way that the Brexit Party has.

Now, you may retort that these people who have come and talked to me about curtailing trans rights seem very reasonable. They may do, but that does not make their position reasonable, particularly in the light of what they are proposing. The Brexiteers appeared reasonable to a majority of the electorate in 2016, that did not make them reasonable it just meant they appeared reasonable to some. In effect they want trans people to have fewer rights than cis people. That is both extreme and absolutist. It is neither extreme nor absolutist for me to expect that I should be accorded basic human rights that you and everyone else take for granted.

Finally I am dismayed that people have attempted to get you fired. I am particularly dismayed because transphobes have attempted to get me fired as well, on more than one occasion. In fact I know a number of trans people who have either been threatened with the sack or who have actually lost their jobs because of action like that which you describe. In one instance they tried to have an elected councillor removed by the same dishonest means.

My definition of having courage to speak out is where one is speaking out against a massive media consensus, which most trans people are trying to do. Most trans people I know are literally frightened to step outside their front doors every morning, especially those of us who are children. That is courage. You have a media platform with huge numbers of Twitter followers, most trans people do not. Indeed we are pretty much excluded from the mainstream media debates about trans rights. The transphobes get plenty of airtime and column inches, trans people do not, and the column inches we do get are generally reserved for "human interest" stories. We simply do not get the opportunity to argue against the dishonest claims of these “concerns” hate groups, if we did the "debate" would have ended long ago. We are literally being prevented from taking part in the media debate about trans rights. You have more opportunity to influence this debate than I do, by a very wide margin.

Now I don’t suppose that you have hitherto regarded yourself as being firmly on the side of the transphobic hate groups, however the fact is that, from the tweets I have seen, you are, firmly, fairly and squarely and in all respects positioned in the transphobes’ camp. I have explained why this is the case and why there is no middle ground. I know you would like there to be but there is not. Either you want me to have full human and civil rights the same as everyone else or you do not.

You may not have realised that you are firmly on one side, you may consider yourself the kind of person who always sees good in both sides and cannot believe these apparently reasonable people are transphobes, however the fact remains that, in every position you have taken in these tweets you have taken one side, the side of the oppressor.

Up to now you may have been unaware of this. You no longer have that excuse.

If you would like to discuss this further I am happy to meet with you and talk in a friendly and constructive manner to explain things from the point of view of trans people. You have obviously had contact with those who want to convince you of the case against trans rights, perhaps listening to trans people's point of view might be in order. 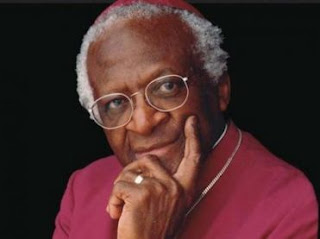